One of the gallery pieces illustrating everyday life on Civil War naval ships is a plate from the ironclad monitor USS Tecumseh. The single-turreted Tecumseh was commissioned in April 1864. The war would last for one more year, but for Tecumseh it would only last a number of months. The monitor played a memorable role in two campaigns.
Tecumseh’s first assignment was with the North Atlantic Blockading Squadron, tasked to ascend the James River to support General Ulysses S. Grant's operations against Richmond. Grant ordered General Benjamin Butler to move up from Fort Monroe and attack the railroad link between Petersburg and Richmond, with the additional duty of taking City Point. The Union Army and Navy worked to block the channel to prevent Confederate warships from coming down from the James. From June 15-18, 1864, Tecumseh helped by sinking four hulks and a schooner, and by stretching booms across the channel, the flats, and the right bank of the river. Three days after these obstructions were in place, Tecumseh turned back a Confederate threat to Grant's supply line by shelling a line of breastworks at Hewlett's Farm.

On July 5, the monitor got underway to join Admiral David Farragut's squadron in the Gulf of Mexico. Tecumseh arrived off Mobile Bay on the evening of August 4th. Farragut was impatient to attack Mobile Bay, and shortly after 0600 on the 5th—150 years ago today—the 18-ship Union squadron moved into action. On that morning she steamed slowly past Fort Morgan, at the mouth of Mobile Bay, leading a line of four monitors that were to cover the advance of the rest of the squadron. While maneuvering to engage the Confederate ironclad ram Tennessee, Tecumseh struck an enemy mine (or “torpedo”) at 0740, quickly rolled over, and sank, with the loss of 92 of her crew, including her captain. 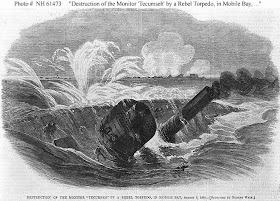 In February 1967, the Smithsonian Institution Tecumseh Project Team found the wreck. Their goal, to raise the ship for a planned museum in Washington, was never realized. Some artifacts were recovered from the ship, which remains Navy property like all Navy ship and aircraft wrecks. In 1984 the plate came to the Hampton Roads Naval Museum.

The English company Bridgewood & Clarke made the plate. The company manufactured earthenware, including white porcelain for the American market, at Burslem in the midlands of England from 1857-64. White porcelain was inexpensive and durable, qualities attractive to Navy purchasing agents then and now. The 1861 census described one of the partners and his business: "Jesse Bridgewood, age 54, Earthenware manufacturer employing 40 men 15 women 20 boys 13 girls."  Bridgewood & Clarke used the British Royal Arms in their mark on the back of the plate. Normally the use of the Royal Arms is reserved for businesses that hold a Royal Warrant – that is, that did some business for the British crown. However, many potters—both English and non-English—who did not have a Warrant also used the Arms as part of their mark to add prestige to their product. Americans are familiar with this strategy through liberal advertising use of the flag or the Statue of Liberty.